Key Questions About Fertilizer and Its Price Answered

CF Industries is the global leader in safe, industrial-scale production of ammonia products for fertilizer, clean energy, emissions abatement, and other industrial applications. Our core product is anhydrous ammonia (NH3), which is composed of 82% nitrogen and 18% hydrogen. Among the numerous U.S. and overseas suppliers of ammonia-based fertilizers, we’re proud to be the world’s largest producer of ammonia on a gross ammonia basis, with an average annual capacity of 10.3 million tons.

While most people have a basic understanding of what fertilizer is and its important role in growing the food needed to feed the world, there are many questions about how it is produced and sold to farmers. The following answers a number of questions we’ve been hearing lately.

1. How are nitrogen fertilizers made?

Fertilizer production relies on the Haber-Bosch process. First, ammonia is produced by synthesizing hydrogen from a fossil fuel feedstock (all CF Industries facilities use natural gas) with nitrogen from the air, with carbon dioxide (CO2) as a natural byproduct of the process. Once produced, ammonia is primarily used for its nitrogen content as a fertilizer itself or as the basis of upgraded nitrogen fertilizers such as granular urea, urea ammonium nitrate (UAN) and ammonium nitrate (AN). At each stage of product upgrade process, there are additional manufacturing plants that operators have invested in to build.

2. How much does it cost to produce nitrogen fertilizers?

The cost of natural gas varies significantly between geographic locations — the Unites States versus Europe, for example — as well as from year to year. Natural gas prices in Europe have been surging. 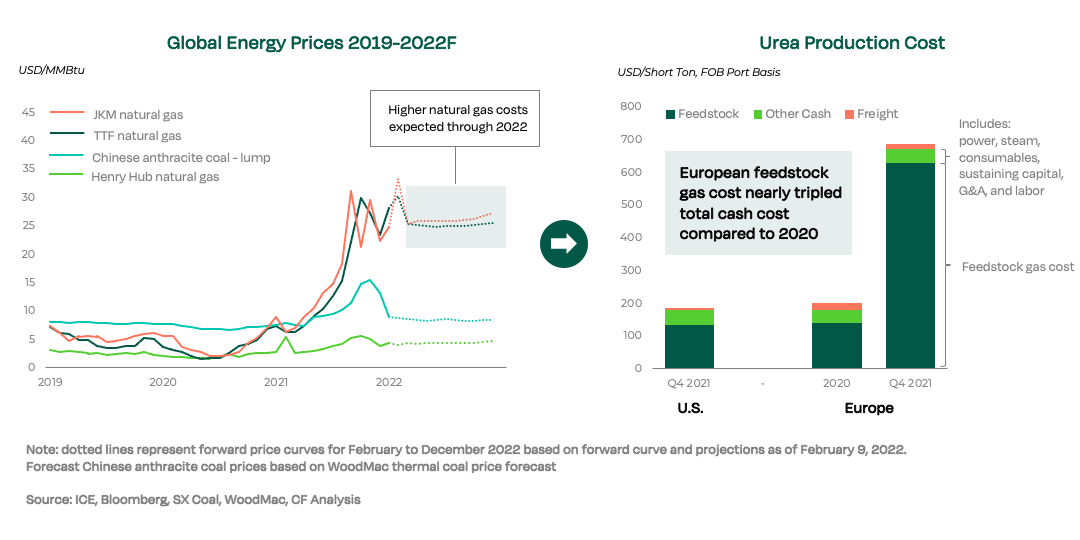 Nitrogen manufacturers in Europe are currently the marginal producer in the world as their high natural gas costs position them at the point of the global nitrogen cost curve where the level of demand for nitrogen and the cost of the next available supplier’s capacity meets. European natural gas prices have hit record highs in early March 2022 due to the uncertainty created by the invasion of Ukraine by Russia, which is a major supplier of natural gas to Europe. This affects prices worldwide.

CF Industries annually publishes its estimate of the global urea cost curve that uses global energy curves and average monthly demand to determine a projection of average urea costs during the year. Actual urea costs can be above and below this range at any point in the year as supply and demand dynamics vary by month. 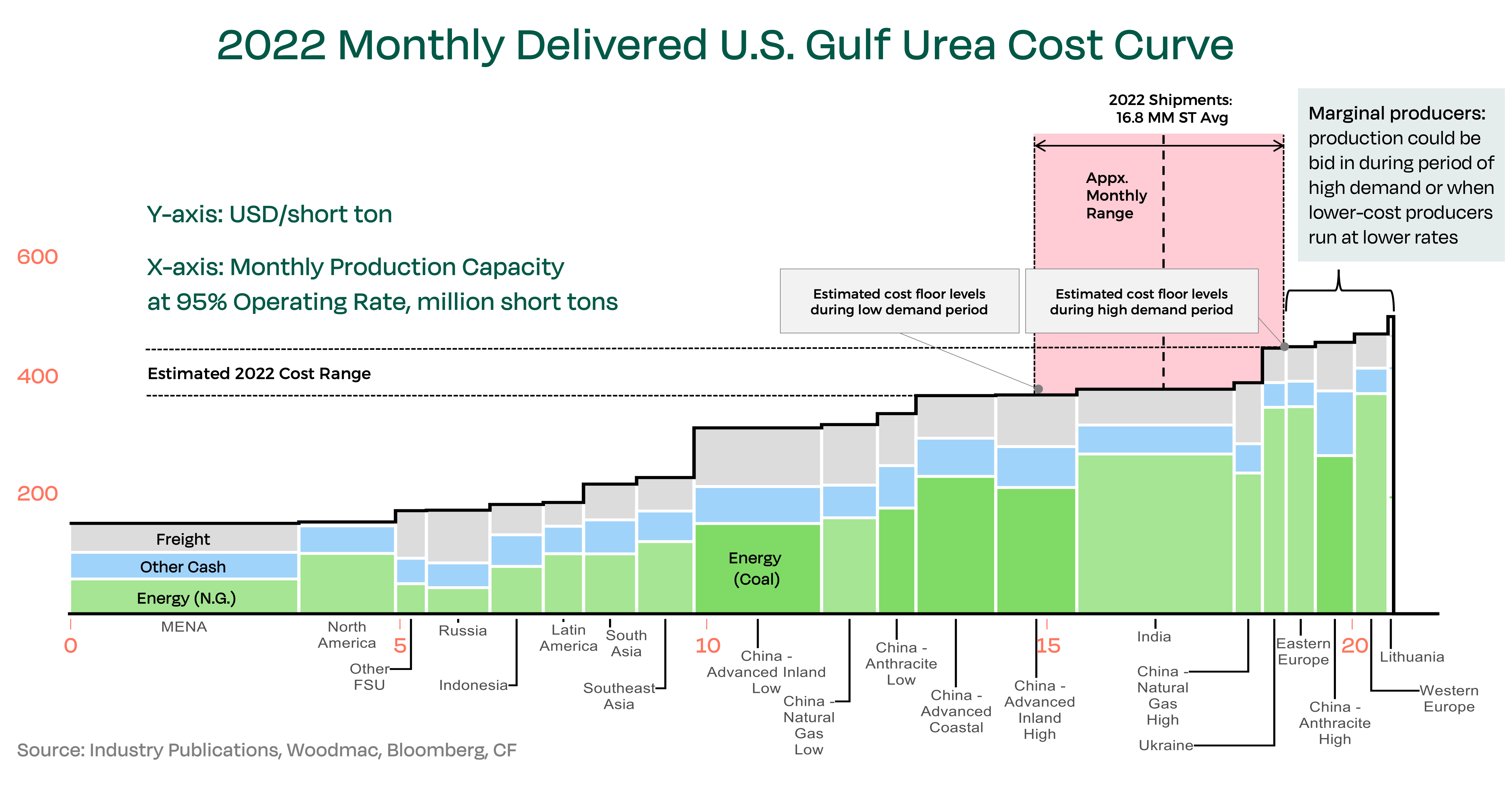 It is also important to note that trade practices can also impact commodity prices such as nitrogen fertilizers. In the case of UAN, we believe that prices in the US have long been depressed and suppressed as a result of unfairly traded imports for which we are seeking appropriate remedial action through US antidumping and countervailing duty laws.

4. What factors have been affecting global supply and demand of nitrogen fertilizer recently?

Demand: One of the key factors driving global nitrogen demand is the same factor driving high crop prices for farmers: the need to replenish global coarse grains stocks. Crop prices have increased as stocks have tightened and forward curves indicate elevated prices going through 2023, incentivizing strong plantings globally. Crop prices have risen further in early March due to concern over potential production and supply disruptions in Ukraine and Russia due to the invasion by Russia. The industrial demand for nitrogen products also increased considerably over the period as the economy recovered.

Supply: Supply is the other major piece of the equation. In 2021, the global fertilizer industry was impacted by a number of supply disruptions, including:

The Russian invasion of Ukraine has raised new concerns about fertilizer supply and has helped propel fertilizer prices significantly higher in early March 2022. While many Ukrainian fertilizer plants were already not operating due to high natural gas prices, the impact of the invasion on Black Sea loading combined with financial, transportation-related and other economic sanctions on Russia has in the immediate-term reduced the availability of fertilizers from that country.

5. With prices so high, why don’t nitrogen fertilizer manufacturers in the United States increase production?

Nitrogen fertilizer manufacturers typically run their facilities 24 hours a day, seven days a week for as long as they safely can unless there is planned or unplanned maintenance needed, other disruptions occur, or operations become unprofitable, due to high natural gas costs, for example.  While product mix can be modified by some producers, that overall amount of ammonia produced is impacted by the supply disruptions such as those that occurred in 2021.

Additionally, the ability to respond to high demand with new supply quickly is limited as it takes at least 3-4 years to build new nitrogen fertilizer capacity.

6. Why are there so few nitrogen fertilizer manufacturers in the United States?

Over the past 60 years, there have been numerous times at which U.S. nitrogen fertilizer manufacturers have been the marginal, or high-cost, producer. These periods resulted in long stretches of unprofitability, leading to bankruptcies and capacity closures; the last big wave came in the early 2000s.

7. How do U.S. fertilizer prices compare to the rest of the world?

U.S. nitrogen fertilizer prices are the lowest in the world. Over the period since January 2021, it is important to note that urea and especially UAN consistently traded at a discount in the US Gulf relative to the prices for these products in other parts of the world and that the size of this pricing discount in the US Gulf increased dramatically in Q4 2021.